Easy.  Just tell the truth in simple, graphic, lyrical verse, and set it to a tune that fits like a piston in a cylinder.
Easy if you’re Harry Robertson.

Simple. Just be a lifelong friend, and then spend more than ten years with gentle, caring persistence, coaxing the material and the memories, piece by piece, into their complete and final order. Simple if you’re Lyn Mathieson.

No problem.  Just master an instrument you have spent fifteen years re-designing and hand-building, sing as naturally as you breathe, in your own accent with every word and note crystal clear, and spend six months in the studio you have built yourself, patiently laying it down track by track.
No problem if you’re Evan Mathieson.

Just look at this one, a perfect match to its companion CD HARRY’S LEGACY. Then take the same trouble and care with text, images, layout, legibility and accuracy. You could frame these pages and hang them in a gallery. One day, if the planets line up, another set of people may do all of these things just as well. But don’t give your grandchildren false hope! 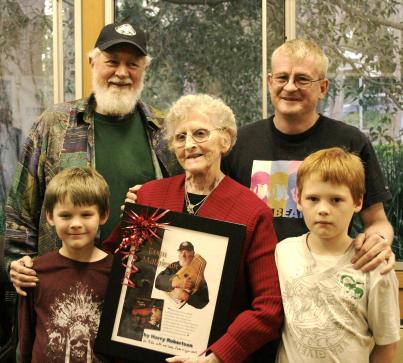 Write a Review of it?

Usually there is one stand out track on even a consistently excellent CD, but this time I had to wait and see which one would haunt me in my dreams. As a Shiny Bum Singer, I have a soft spot for songs about work. (Editor’s Note: The Shiny Bum Singers perform their own topical political Working Songs of the Public Service.)
This CD starts with the first of a set of Harry’s onshore working songs.Scratching For Tin establishes from the first bar that we can all relax about the quality of the voice and instrumentation, and just ride the soundwaves. A bright, metallic autoharp style on this track perfectly conjures up the nature of tin.
There is then a set of three songs Harry wrote about the 1872 construction of the Overland Telegraph Line. In 1972 Harry was commissioned to write and perform these songs, and to take an acting role in the colour feature film No Longer Alone for the ABC TV A Big Country series. Harry focuses on the poling teams who constructed the Overland Telegraph Line linking Australia through the centre from the south to the north. Harry could not help giving this land-locked venture a salty tang, with a team of “buckos” and “bully-boys” navigating the hazards of the terrain with the cadence of Horn-rounding shanties, and it works so well! Evan clones himself into an effective harmonising chorus for the first and the last, but the middle songThe Pole stands apart as a classic, haunting, outback soliloquy. I was once out in such places on and off over eight years, and this song has the real feel. We then go whaling with Harry through the material he wrote for the ABC TV program The Whalers. First with a song about modern day whaling in Western Australia in Albany’s Whalers, and then Harry’s poem The Thrill of the Hunt which harpoons the industry with a cool thrust into the guts by a professional insider.
Still on a maritime theme this time in Moreton Bay we go down with the sand dredger the Kaptajn Nielsen in a sad tribute to the Plimsoll Line which would have saved the Danish crew. Then Harry takes us to Sydney Harbour where he has honed his poetry again to a keen blade with The Isle of Cockatoo, this time flensing the convict regime in a poem with the range of a novel. Offshore then to another island with Norfolk Whalers, (in a song from Harry’s 1971 LP WHALE CHASING MEN Songs of Whaling in Ice and Sun) telling another truth of a more desperate form of whaling and its hazards, and rewards, for the isolated population.
Two of Harry’s Vietnam War protest songs Brother Jack and Is It True? follow. They should have become period pieces by now, but sadly they tell enduring truths to this day.
Next it truly is Time for a Laugh and a Song, and then Harry’s tall tale bush yarn Murrumbidgee Whalers (both from the WHALE CHASING MEN LP) and both delivered here with assurance by Evan.
Humour continues with Rodger’s Folly, Harry’s contribution to a traditional comic genre in which male sexual over-reaching gets its literal come-uppance. This time the tables are neatly turned on a would-be homicidal husband. It was thought originally that this offering was just a poem, but unrelenting research unearthed the tune remembered by Andrew Kruger (now SBS Radio Executive Producer WORLD VIEW program) who had learned it directly from Harry in Brisbane back in the 1960s.
Then a delightful find, Wee Honey Jar which warns of the foibles of Harry’s great friend and fellow folk legend, Declan Affley. Harry wrote this based on his own experiences at the hands of “Doctor” Affley at the 1967 Port Phillip Folk Festival (Australia’s 1st National Folk Festival).
Sobriety returns paradoxically to the album with A Musical Reflection another haunting soliloquy conveying Harry’s searingly honest commentary on the elephant in the room of the folk scene of his era, the drinking that went with the singing. This is a companion piece to the similarly titled Reflections on Evan’s 2007 HARRY’S LEGACY album. I do not know of any other songs about drink that match this pair in conveying, with such psychological insight, both sides of the experience. This one would make a great session standard, but there is a spectre at the feast.
How else to end the album but with Harry’s own voice, and it seems to endorse rather than overshadow Evan’s own interpretations of his songs and poems. I heard the earlier playing of Harry’s steady, measured, perhaps epic, delivery of his original shanty form of Ballina Whalers at the 2001 National Folk Festival launch of the re-issue CD of Harry’s original 1971 WHALE CHASING MEN LP. (The Mathiesons had organised this re-issue through the National Film and Sound Archive, Canberra). Lyn had chosen to play Harry’s rendition (taken from an old reel-to-reel archival tape) as part of the Re-issue Launch Concert she scripted and compered. The sound of Harry’s unmistakable voice truly conjured ghosts in the packed venue for the full six minutes that the track ran. That original rough but evocative recording has been transformed by Evan, with God knows what painstaking audio re-engineering, into a clarity that brings Harry right back into the room.
The last track returns again to one of Harry’s keen-edged poems. This time his voice in The Politician conducts its own Reign of Terror, guillotining that entire despised modern aristocracy.
Tribute to Harry Robertson is a good-listening, must-have album for any serious collector.
Oh, I almost forgot, the track that did haunt me in my dreams was the moving outback soliloquy The Pole.
© 2009 Chris Clarke, Canberra
and the Mathieson Australian Music And Image Archive (MAMAIA)

When Harry Robertson died in 1995, we organised a Tribute Concert in his honour at the Woodford Folk Festival. Our dear friend Rita Robertson was the Guest of Honour, and it was at this time that she confided to me that she would really like to put together a complete archive of Harry’s life and music to pass on to their children, grandchildren and great-grandchildren, as well as to the “folk” of present and future generations who share our common ideals through song. Out of friendship, love, and respect for both Rita and Harry, we willingly took on this task for her. It continues to be an ongoing labour of love. Thank you Rita for your unstinting generosity and friendship over the years, but mostly thank you for sharing your many personal insights with us as we built the Harry archive over many most enjoyable moveable feasts. I am delighted that now in 2009 as you celebrate your 80th year, we have been able to round out the Harry collection for you with the release of Evan’s new CD Tribute to Harry Robertson 1923-1995 and the launching of the new websitewww.harryrobertson.net
It’s time to thank all of you who contributed in so many ways to this project. Thank you again — all of you — and a very special thanks to Evan for all the talent, inventiveness, and sheer hard work he has put into his invaluable musical contribution.
Our www.harryrobertson.net site will continue to develop under this skilful guidance of our good friend Don Williams with whom we have shared many marvellous Nariel Creek Festivals. Don has very kindly made time available from his www.franktraynors.au.com site to be our Webmaster. The late greatFrank Traynor’s Folk and Jazz Club was a very important part of the Australian music scene from 1962-1975 so please visit the site if you were there and would like to add your Traynor’s story to the wonderful materials already contributed by Frank’s widow Mary Traynor.
And finally, many thanks to Michael Bourne and the Folk Rag team for continuing to provide Queensland folk with such a good point of contact through the Folk Rag magazine and website.
2012 and another FOOTNOTE FROM LYN MATHIESON
Since we estabished our Harry Robertson website in 2009 under the guidance of the inimitable Don Williams, we have been working under the tyranny of the great physical distance between Melbourne where Don lives, and “up the creek” on the Pumicestone Passage in Queensland where we are based when we are not travelling in our motorhome “The Magic Pudding” (yes, sadly we had to retire our original motorhome “The Tardis” through her old age and the fact that Evan had misplaced “The” Sonic Screwdriver somewhere in his woodworking shed ——— or so he tells me!). We thought that the couple of thousand kms distance would be manageable seeing that we live in the days of Fast Internet Broadband — but our particular little piece of heaven “up the creek” does not qualify for modern broadband! In fact we have a landline which fails whenever the moon is full and the tide is high… or it rains. We thought the landline connection was very slow until we purchased a super-dooper Telstra Express Card for our MacBook……
The end result has been that we have continued to have great difficulty in emailing archival photos and music to our Webmaster Don in Melbourne. Mostly we’ve had to resort to snailmailing cd’s of the material — which is really great for spontaneous think-tanking creativity in developing a website! I might add that our friend Don Williams is a remarkable intelligent and inventive “Computer Boffin” who works on the world stage in his field, so when even he was thwarted in his attempts to bring our “up the creek” communications into the 20th (yes I do mean 20th not 21st century!), Evan and I decided to call upon the remarkable talents of our musical friend Mary Brettell (who to our good fortune lives in Brisbane, just an hour’s drive from us!) to become our Webmistress for www.harryrobertson.net and our brand new www.evanmathieson.net
So “Thank You” Don and may your www.franktraynors.au.com and other archival music projects continue to flourish
and “Welcome” to the musical and merry MaryB
Valentines Day 2012